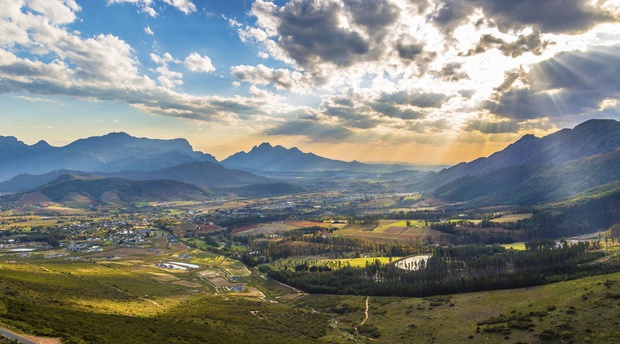 After the revocation of the Edict of Nantes in France in 1685, when Protestantism was outlawed, hundreds of so-called Huguenots fled their homeland, 277 of them arriving by ship at the Cape of Good Hope. Many of them were given land by the Dutch government in a valley called Oliphantshoek (Elephant’s Corner) – so named because of the vast herds of elephants that roamed the area. Soon after they settled here, it become known as Franschhoek (French Corner).

This heritage lives on today with the Huguenot monument standing proudly at the top of the village. The museum nearby chronicles the history of those brave pioneers, with each of the original Huguenot farms having its own fascinating story to tell.

Franschhoek boasts some of South Africa’s ‘Top 100’ restaurants and has become known as the country’s Culinary Capital, providing visitors with a memorable dining experience. Leading chefs create everything from cutting-edge cuisine to stylish light meals, using only the freshest local produce paired with superb local wines. Franschhoek is also a member of The Délice Network of Good Food Cities of the World. Délice is an international network of likeminded cities engaged in
promoting the benefits of culinary excellence and good food. Franschhoek was granted membership to this prestigious network in October 2014, and is the only member in the Southern Hemisphere.

Franschhoek also offers visitors diverse culinary experiences through its festivals such as the Franschhoek Bastille Festival, The Franschhoek Cap Classique & Champagne Festival, as well as its routes – the Food and Wine Route, the Artisan Food Route, and Franschhoek Rond en Bond. The Franschhoek Artisan Food Route, in particular, exposes the visitor to a range of
the finest olives, cheeses, salmon trout, charcuterie and artisanal breads South Africa has to offer.
Internationally acclaimed chefs who include Le Quartier Français’ Executive Chef, Margot Janse, Reuben Riffel, Darren Badenhorst (The Restaurant at Grande Provence), Carmen Muller (The Tasting Centre at Rupert & Rothschild) as well Neil Jewel (the Charcuterie Guru) are based in Franschhoek, adding further acclaim to the area.

Art Franschhoek Route - As with fine food and outstanding wines, so too fine art needs to be savoured in order to be appreciated. Regarded as SA’s premier food and wine destination, Franschhoek has added art destination to its résumé. Franschhoek is home to some of the country’s finest art offerings and a growing number of local and international art enthusiasts, a need arose to establish Art Franschhoek, which showcases all of these and much more. The route aims to prom

Share This Page
We are glad to confirm that all staff has been Vaccinated!!

Note that we are taking all precautions according to COVID-19 Government health and safety guidelines to ensure the safety of you and our staff.